It was a simple question about being distant kin to the monkeys. The kind of question, like “Why is the sky blue?” “Where do stars go in the morning?” that any curious third grader might ask. His teacher, however, was irate. “Ridiculous,” she said. “Don’t bother me with impertinent questions.”

This kind of a rebuke did not sit well with the grandson of Peter Klopfer.

Klopfer is a distinguished Duke University biology professor, author of more than 20 books and an expert in animal behavior and evoluntionary biology. His daughter Erika Honore, the questioner’s mother, is a retired veterinary scientist with multiple degrees and the author of A Concise Survey of Animal Behavior. She and her doctor husband know a thing or two about kinship with monkeys, and had – along with his grandfather – passed along enough anthropological truth to the third grader that his teacher’s rebuke had the opposite effect: now he wanted to know the story of evolution.

“Erika and I started looking for an age-appropriate book on evolution,” Klopfer says, “and it was nowhere to be found. That’s not to say that it doesn’t exist, but we couldn’t find a good book for six-to-ten-year-olds anywhere. So we decided to write our own.

Thus evolved Darwin and the First Grandfather, a small, colorfully illustrated (by Gretchen Morrissey) book of how humankind began.

Darwin’s narrator, asked the where-did-we-come-from question by her own 8-year-old replies that she’ll tell him two stories. She tells first the biblical creation story – which would presumably please the creators of Texas textbooks (and which many if not most Christians see for what it is: a story.) Then she launches into another story, a tale of a boy names Charles and the discoveries he makes as he follows his own curiosity. It is a delightfully readable account of  creation from one perspective and evolution from the perspective of scientific truth.

Scientific publishers who had brought out Klopfer’s scholarly books were less than enthusiastic about undertaking a children’s book. The firm that had published his earlier children’s book had subsequently gone out of business, and he lacked a good connection to children’s book publishers. One atheist publisher was delighted with the idea, but eventually said he could find no way to market such a thing. “So we just put it aside,” Klopfer says now, “and it sat in a file cabinet for years.” 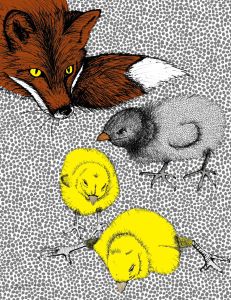 Happily for children everywhere, the father-daughter duo recently dug the manuscript out again and decided to self-publish. Klopfer’s neighbor, a textile design artist, agreed to do the illustrations, and Darwin and the First Grandfather was born.

That third grade questioner? He did learn the scientifically accurate story of evolution, which today’s third graders can learn with the help of his mother’s and grandfather’s book. Currently he is a graduate student in computer science at Yale University.