Maybe 2020 could be the Year of the Moon? The moon, I think, has to have some mythological connection to peace and serenity, despite its less noble connections and the recurrent idea that man (woman, perhaps?) will one day set foot upon it. God forbid. In any event, wouldn’t it be lovely to be feeling peaceful and serene, some 300+ days from now, as we say Goodnight, Moon to 2020?

I am simply a moon freak.

After my umpteenth Facebook posting of moon photos I happened to wonder, publicly, if there isn’t a good name for moon worshipper – which prompted friends to suggest Artemisians, or Selenians, or (not my favorite,) Lunatics. The nice thing would be that Artemisians/Selenians would be utterly inclusive, since the moon does not shine arbitrarily on just a chosen piece of planet earth. Thus it would be pretty hard for one group of earthlings to claim to be chosen by the moon over some other group. 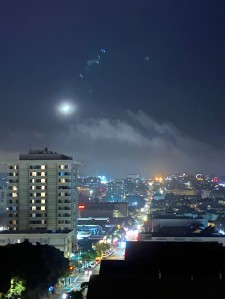 And Lord knows we could use a few less exclusionary religions on planet earth. I admit to being a committed Christian, but I lean heavily toward interfaith collaboration. Especially when it comes to the Brahma Kumaris. Brahma Kumaris believe all religions are valid – imagine that. Plus, they have women priests, among whom a personal favorite is my California friend Sr. Chandru whose name roughly translates to Sister Moon. Selenians – I’m going with Selene, even if she had fifty daughters and that seems a bit much – would shine benevolently upon all humankind, while veering somewhat toward feminism. Masculinity would be okay in Selenianism, but only in a cuddly, non-aggressive Man-in-the-Moon sort of way. The only definitively male-type moon figure I find, after what was admittedly not a mythologically extensive research effort, would be Thoth, and do we need Thothism, for heaven’s sake?

Most of the photos accompanying this paean to the moon were shot from my pillow, which happens to be aimed squarely at a 7th floor west-facing window (or from that window itself.) It has featured, of late, a progression of such beautiful interactions between moon, clouds and the ever-lit urban landscape below as to make reading myself to sleep virtually impossible without regular interruptions to take iPhotos. In other seasons, when it’s full and on the wane, the moon will suddenly appear in all its glory at about 4 AM or so, shining into the bedroom as if demanding to be appreciated.

The thing about moon appreciation is that it requires absolutely no energy or profound thought; it bears no political implications, and it is immediately reciprocated with nothing but more beauty. Lest you think this movement leaves something to be desired during the non-moonlit hours, serious Selenians tend to be also cloud appreciators. Seriously. I happen to be member #45,662  of the international Cloud Appreciation Society; check it out.

So, back to the proposed Year of the Moon. Over the year just past there have been floods and fires and hurricanes and tornadoes, all at least partially related to the actions of us earthlings. And endless wars and bad stuff. But if you discount the newspaper’s front page (all known Selenians read print newspapers) there has also been much to appreciate (see ‘Happy Old Year from Mother Nature’ on this very page.)

The Year of the Moon, should we Selenians prevail, will feature even more to appreciate. Feel free to pick your own appreciation for the year: a good harvest; an electoral victory; yellow tulips; economic strength; peace and serenity; disappearance of (fill in your own blank;) good health; universal healthcare; early rainfall. We will plan to check in this time next year, to see how well it’s gone.