Vicente Fox is not shy with his opinions.

During a recent event at San Francisco’s Commonwealth Club the former president of Mexico (2000-2006) shared his thoughts on border walls, immigration, the global economy and Donald Trump. None of these would be pleasing to Mr. Trump – nor would they come as any surprise, since the two men regularly tweet insults at each other.

In advance of a conversation with Commonwealth Club CEO Gloria Duffy, Fox strode onstage and entertained his audience – which seemed not to include many Trump supporters – with a 30-minute, statistics-filled, no-notes commentary on the world in general and U.S./Mexico relations in particular.

As to that latter, “After years of democracy, friendship and cooperation, your leader says ‘Wait a minute! We have to build a wall!’” This, Fox maintains, is a very bad idea. “You are perhaps shooting yourself with a gun in the foot. Attacking ourselves in a trade war? Crazy.” Fox suggests that successful relationships between neighbor countries are built on “love, compassion, diplomacy and democratic dialogue.” The trade war now seeming likely will benefit neither, he believes. 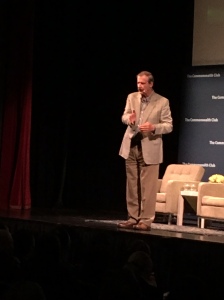 And as to the wall? “It’s going to take 35 billion U.S. dollars to build the wall. With that $35 billion you can create 10 million jobs. China built a wall, at great sacrifice. Paid for it with their own money. To protect against the Mongols and the Manchu. What happened? China was invaded by the Mongols and the Manchu. Berlin? They built a wall to keep freedom out.” Fox is not enthusiastic about walls.

Immigration? “We don’t want any more invasions by gringos.” Fox suggests that the problem of illegal immigration into the U.S. might better be addressed by spending that $35 billion on “going to the heart of the problem, in Central America,” where desperate situations in more than a few countries are forcing desperate people to attempt to enter the U.S. through Mexico.

This writer lays no claim to expertise on Mexican politics or political history. (Two Mexican friends, when asked, allowed as how they felt Mr. Fox got very rich during his presidency but didn’t do a lot for their poor communities.) But former president Fox, movie-star handsome, charmingly funny and a man who thinks the world would be better off if women were in charge? What’s not to love?

Fox, in his Commonwealth Club appearance, referred more than once to the Dalai Lama’s assertion that the world belongs to humanity. “That means all 8 billion of us,” he says. (A tiny exaggeration, though checking the world population clock is both fascinating and scary.) Among Fox’s strongest current opinions is that his non-friend Donald Trump spends too much time talking about withdrawing his country from the world, protecting its citizens, building walls, making America great. Fox suggested to his San Francisco audience that he had a response to this:

“I have decided to name myself – humbly – head of a shadow government representing the world,” Vicente Fox quips, “to say to your president  — — —  ‘What about us??’”