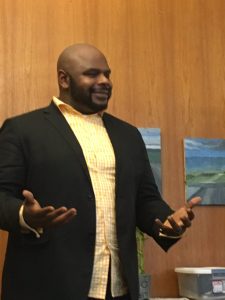 McBride, who merges the zeal of a Baptist youth leader with the practicality of 15 years as an advocate for community peace and justice, believes that dream can become a reality. Not tomorrow – but soon enough to believe in it. One evidence of his belief is in the fact that some eight years ago he moved his family (a wife and three daughters) into an Oakland, CA neighborhood tough enough to have won the title of the “Kill Zone.” The idea was to understand firsthand the root causes of gun violence. They have occasionally had to leave town briefly when one group or another was exceptionally angry, but they’re still there.

And gun violence is actually down. This is in part due to McBride’s blatantly walking both sides of the street – as a civilian trainer for police, and a community activist for oppressed groups. The double life has its problems. As a central figure with a group that linked arms to stop traffic on the Bay Bridge one busy afternoon he drew the ire of both law enforcement agencies and his own father, whose career was in transportation. (McBride tells of committing a minor offense as a teenager and asking the responding officer to “take me to jail, just don’t take me to my father.” His father has mellowed after seeing his children reach law-abiding adulthood.) But when community organizers see him hired to work with police, they often consider it a betrayal. In reality, McBride walks both sides convinced that they can come together in the middle.

McBride spoke recently on “Crossing the Street: The Power of Peacemaking,” one of a series of programs on “Waging Peace” at Calvary Presbyterian Church in San Francisco. Much of the talk was concerned with what he terms “the theology of resistance” – as in resisting injustice.

“Sawubona,” McBride said – having his audience repeat the word several times – “is the Zulu word for hello. The traditional reply is Sikhona.” The expanded meaning of the words is central to resisting injustice, he added. “Sawubona literally translates “I see you.” Sikhona means, “Because you see me, I am here.” The business of seeing “the other” with as few lenses, or filters, as possible goes to the heart of McBride’s peacemaking message. 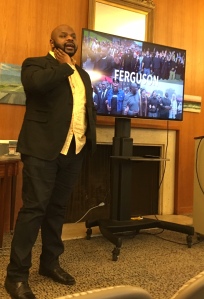 Peacemaking, he argues, requires “disrupting my point of view with ‘the other’s point of view. It  is about stepping into the middle of the tension.”

Opportunities to get groups like community protesters and law enforcement officers to meet in the middle of the tension without violence are few, and fraught. McBride has been called to places like Ferguson where tensions have long simmered – and already exploded. But his ability  to see the perspectives of opposing sides boosts his ability to defuse.

McBride’s lay audiences – this recent one consisted of 40 or so individuals of differing ages, ethnicities and views – rarely have an opportunity to fully inhabit either side of such tensions. But considering how to see “people closer to pain than we are” makes the middle of the street at least a less threatening place to stand. And having the husky, smiling McBride standing there too wouldn’t ever be a bad idea.

One thought on “Ben McBride on Peacemaking 101”