Women everywhere suffered a loss on December 30 with the death of Kenneth Edelin, retired ObGyn and longtime champion of reproductive justice. Dr. Edelin died of cancer at his home in Florida. He was 74. 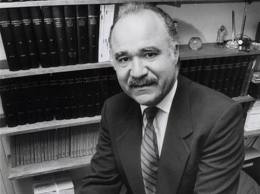 Ken Edelin’s obituaries all lead with the story of his sensational manslaughter trial in 1973.  As the New York Times reports, “Dr. Edelin (pronounced EE-da-lin) was charged with causing the death of the fetus of an unwed 17-year-old during an elective abortion in her sixth month of pregnancy. In a six-week trial in Boston that explored uncharted legal ground and made headlines across the country, Dr. Edelin, who was black, was vilified as a baby-killer and defended as a victim of racial and religious prejudice being tried for an action that had never been defined as a crime: killing a fetus that may or may not have been a “person,” and whose rights had never been specified by law.” He was convicted, but later acquitted of all charges.

Edelin’s long career, though, was much more than that event. It included teaching, writing, mentoring, and advocating for reproductive justice, especially for poor women of color. Among other honors and awards, he received the Margaret Sanger Award, its highest honor, from the Planned Parenthood Federation of America in 2008.

In the several times I spoke with Ken Edelin during research for Perilous Times (about his story, which appears on pages 109-111) and after its publication (to thank him once again) he was gracious, generous and supportive. He was particularly proud of the book he wrote about the Boston trial, Broken Justice: A True Story of Race, Sex and Revenge in a Boston Courtroom, and understandably a little miffed that it had not received the recognition he felt it deserved. It may have been too exhaustively detailed to find a major publisher or a host of readers, but Broken Justice makes certain that the full story of that episode is preserved.

It was an honor to have encountered Ken Edelin, even only in phone calls. He will be missed.