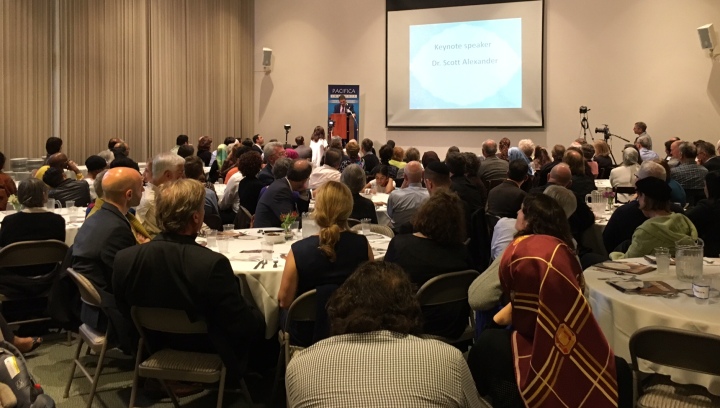 Dates, rice and eggplant moussaka for birthday dinner? It works.

A recent birthday of mine happened to coincide with a long-planned Ramadan Interfaith Iftar Dinner co-hosted by Pacifica Institute and Calvary Presbyterian Church in San Francisco. Since I was minimally involved in the planning and execution of the event, and maximally involved in the birthday, it made sense to combine the two. Plus, I got a lot of mileage out of responding to questions about birthday plans with news we were expecting 225 or so friends for dinner.

The eventual total number of guests will remain a mystery, because so many kept showing up without reservations and we were simply told not to turn anyone away. Attendees were Muslim and non-Muslim, Catholics, Protestants, Jews and Buddhists. (“You know the difference between a Buddhist and a non-Buddhist?” quipped Rev. Ron Kobata of the Buddhist Church of San Francisco; “The non-Buddhist thinks there is a difference.”)

This was not just a celebratory dinner, it was an Iftar dinner, the sunset meal at which Muslims break the fast they have observed since sunrise. To be clear about it, sunrise on June 8th in San Francisco was at 5:48 AM, and sunset was at 8:37. That is considerably longer than this weak-willed Christian generally goes without sustenance. Having had a perfectly good lunch, and  swiped a half-dozen or so dates while putting bowls on the tables, I still had to sneak a glass of milk from the kitchen to keep from fainting away at the welcome table.

Given that dinner would not be served until after the call to prayer at 8:37, the program preceded the meal. It included a video about Pacifica Institute, which was founded in 2003 by a group of Turkish Muslims dedicated to social justice, interfaith cooperation, relationship-building and partnership for the common good – any tiny advancement of which would make a pretty fine birthday present for anybody. Pacifica is aligned with the worldwide Hizmet Movement (“the Service”) which promotes service to humanity regardless of faith, tradition, gender or ethnicity.

We also saw a video about how fasting strengthens one’s spirituality in multiple ways. Muslims observe the fast – abstaining from food, drink, smoking, sexual activity and bad behavior including lying or cursing – every day during the month of Ramadan; which does not exactly compare with giving up chocolate for Lent.

Keynote speaker Dr. Scott Alexander, Assistant Professor of Muslim Studies at Catholic Theological Union in Chicago, spoke to the evening’s theme: The Art of Living Together. “Sharing the joy of fasting,” he said, “fills us all with hope. It stands in opposition to the strident voices of hatred that want us to believe our troubles are the fault of others.” Alexander ended with a prayer that “God will allow others different from ourselves in all ways to touch our hearts.”

One of the co-leaders of the event, who served as MC along with Pacifica Institute’s Fatih Ferdi Ates, was Calvary member Robin Morjikian, whose father is Armenian. Ates, when thanking her, noted that the evening involved the daughter of an Armenian working with a group of Turkish Muslims on an event held at a Presbyterian church and featuring a keynote speech by a professor from a Catholic University. Buddhist Rev. Kobata presented awards to three honorees.

In lieu of birthday cake, dessert consisted of mixed fruit and baklava. I’m not sure how next year’s birthday will stack up.

“You’re not leaving here with your blood pressure that high,” the doctor said. It was 189 over something equally ridiculous. It was not interested in coming down. Finally she said, “Okay, pick up this prescription on your way out and take it the minute you get home.”

Vividly running through my head were images of my mother, who suffered a series of strokes that eventually killed her in her 70th year. Plus images of assorted aunts and others who suffered debilitating strokes and often early deaths.

“But . . . but,” I said to the doctor, as I have repeatedly said since my carefree youth; “I don’t have high blood pressure. My three older sisters? They all had high blood pressure. They also all had beautiful auburn curls, while I got the utterly straight, dishwater blond hair. So, shortly into our adulthood, I took to saying, ‘OK, keep your gorgeous curly hair, I’ve got the good blood pressure.’ It seemed like a pretty fair trade.” My physician said, not unsympathetically, “Those genes may have caught up with you.” And just like that, I joined the ranks of the hypertensive. That great mass of humanity waiting apprehensively for the stroke or heart attack that might swoop in and end it all.

By the time I got home I was visualizing an immediate demise.

Unlike my mother’s generation, though, today’s hypertensives have internet encyclopedias worth of information and an arsenal of drugs bewildering enough to induce a small stroke if you really try to figure them all out. Beta blockers. Diuretics. Angiotensin II receptor blockers. Vasodilators. A good doctor, whose advice you can follow, at least on which meds to take, is a great boon.

The rest of the try-not-to-have-a-stroke business is fairly straightforward. Quit with the nicotine, and moderate the booze (or quit that too.) Watch the weight – extra poundage, especially around the midsection, can increase your stroke probability rather dramatically. Walk for at least 30 minutes a day, increasing the distance as you can. (Swim, bike, exercise.) Salt can do you in fast; if you’re trying to stay within the recommended 1,000 to 2,000 mg per day, a large order of fries (350 mg) might not be a wise choice.

This writer is good with most of the above – excepting an occasional uncontrollable urge for a small order of fries. Plus whatever that was I picked up from the Kaiser pharmacy definitely worked. One tiny little pill, and the next day my blood pressure was 114 over 85.

Maybe I’ll stick around for a while.

All I wanted was three boxes of toffee sent to my daughter as a house gift. This was because my daughter, who has exquisite taste in many things including candy, is particularly fond of See’s Toffee-ettes. I discovered this on a visit to her house, when I was about to withdraw a toffee from the See’s box on the counter. “Watch it,” remarked her gentleman friend; “you don’t want to be taking the last one.”

My daughter, it seems, had brought a box back from a trip to San Francisco some time ago, and rationed them carefully out to herself. Down to the final toffee, she walked in from a long day and reached into the box. Turning upon her mild-mannered gentleman friend she said: “YOU. ATE. MY. LAST. TOFFEE-ETTE? I cannot believe you did that!! My LAST toffee-ette.” It was reportedly a very bad scene. But soon afterwards a package arrived from the See’s people (via the gentleman friend), containing three boxes of Toffee-ettes, and harmony was restored.

Back in San Francisco, the motherland of chocolate and toffee, I knew exactly what I wanted to send for a house gift. I went immediately to the store, found the toffee and placed the order; anyone who has ever found The Perfect Gift will know how supreme was my self-satisfaction.

Weeks later, curious as to why I hadn’t heard anything, I learned that no house gift had appeared. More weeks passed as I struggled to trace the order. Equipped with sales ticket, order number and a clutch of stapled-together slips of paper, I pleaded with the local store manager (“You’ll have to deal with the online order department”) and the online order department (“You need to go back to the store”) in an ongoing comedy of errors that was not funny at all. More days went by.

“Maybe you should call Warren Buffett,” my husband remarked.

“Sure. The story is he bought See’s because he liked their candy.”

Well, this reporter was unable to confirm that story… but Buffett undoubtedly likes the company. Berkshire Hathaway bought it in 1972 for $25 million. Today it brings in more than three times that much every year in earnings. My daughter and I certainly do our part to help.

Whether or not Mary See – the smiling, bespectacled lady on the candy boxes – had the Toffee-ettes recipe in her collection when she helped her son Charles open the first store, in Los Angeles, in 1921, is also unconfirmed. But likely; Mary did know her candies.

Somebody, somewhere eventually found my order and started a new shipment, which reached my daughter approximately two months after my visit.

We want to believe the original shipment went to Warren Buffett.