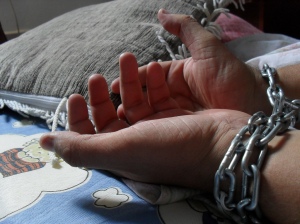 Suppose, just for a moment, you are a 13-year-old girl who has been trafficked in America, the land of the free.

You’ve been brought to the U.S. – kidnapped, sold by your impoverished family, picked up from the streets of some land where girls have no value – and prostituted. Or more likely here, you’re a very unlucky American child victimized by traffickers. As a result of this tragic history, you are pregnant. Or, you survived God knows what only to become a 20-something victim of human trafficking – which now leaves you pregnant.

You should be forced to carry this pregnancy to term? Excuse me?

This is the human face of the human trafficking bill currently being held up in the Senate. Texas Senator John Cornyn’s “Justice for Victims of Human Trafficking” bill would “boost support for and protection of victims of human trafficking” – unless they happen to get pregnant. Once they become pregnant, that support and protection disappears. Tucked away within the multi-page piece of legislation is a stipulation that abortion could not be paid for with these funds.

It’s the old Hyde Amendment thing – the bill passed late in the 20th century that sent women’s reproductive rights straight back into the 19th century with the stipulation that never a federal dollar would be paid to help them end unwanted pregnancies.

Some young trafficking victims might still seek help, since there are now exceptions in cases of rape or incest. But the fact that the victim herself would bear the responsibility for proving the circumstances of her pregnancy is an insult added to egregious injury.

Human faces get lost in congressional rancor. Senators accuse one another of subterfuge and betrayal. Republicans accuse Democrats of one thing, Democrats accuse Republicans of another. Very little gets done. And in it all, the human faces disappear: faces of mere children who never had a break, of women of every age who deserve a life.

If they had voices, those faces might say, “Remember me?”

2 thoughts on “The Human Face of Human Trafficking”